Home > Testimonials
This is box title 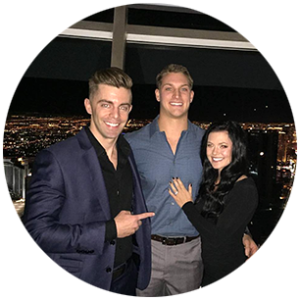 The proposal worked out perfectly.

I really appreciate the time and effort you put into it in order to make it a success. We also appreciate the autograph. Holly and I hope to see you really succeed in the next few years. Thanks again!

This Magic Moment went above and beyond to make this event a memorable one!

Rob was very professional and talented, and truly made our engagement magical. (No pun intended) 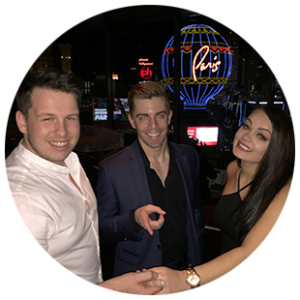 The proposal worked out perfectly.

I would like to thank you so much for everything you did, I will definitely recommend you to anybody going to Vegas who wants to do something special!

Words can not describe how good a magician and man Rob Anderson is.

For the past several months I have been working on an idea to propose to my girlfriend and Rob went above and beyond to help me coordinate a meaningful proposal.

So here is what we worked out. Rob was able to coordinate with me and establish a special magic show that would take place on the street next to the Bellagio Fountains. The plan was for my girlfriend (who had no idea she was going to be proposed to) and I to travel to Las Vegas where we would meet Rob on the street where he would be performing a magic show.

The magic show kept my girlfriend and I so well engaged based on his performance that it kept us so mesmerized until the end of the performance where he made the engagement ring appear and as a true gentleman he handed me the ring, spoke about how this moment goes above and beyond any magic trick, stepped aside and provided me the opportunity to propose to her in front of the Bellagio Fountains.

Keep in mind that the premise behind this was to make sure that we time the magic show and the Bellagio Fountains to finish by the time the magic show ended, and I finished proposing – with Rob not only did we have one of the best experiences but also we hit every single mark.

Take into account, the show ended, he handed me the ring, I proposed and as we turned around the Bellagio Fountain Show began.

I highly recommend working with Rob Anderson and would like to truly encourage everyone to consider him for any event that you may be having. Rob will always be known by us as family because he shared with us such a special moment- I can assure you, NO ONE WILL GO ABOVE AND BEYOND like Rob. 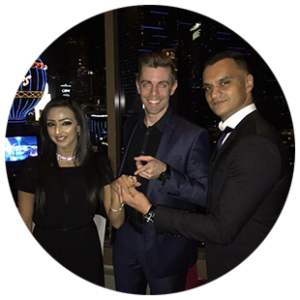 A heartfelt thanks from Aman and I for making our engagement completely mind blowing and special!

I still have no idea how you and Aman pulled it off but I’m so grateful to you. A once in a lifetime experience and you are a central part of it. You’re super talented, we love you and what you did for us. So glad to have met you & I hope we meet again soon (at the wedding hopefully!)